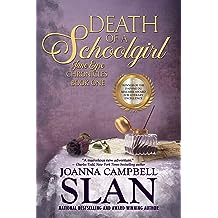 Death of a Schoolgirl: Book #1 in the Jane Eyre Chronicles

Winner of the DAPHNE DU MAURIER AWARD FOR LITERARY

She answered a child’s cry for help. She never expected to uncover a murder and unlock secrets a king wants to keep…

Yorkshire, 1820. Happily married to a country squire and the mother of a young son, Jane Eyre Rochester enjoys an enviable life, one that as an orphan, she could have never dreamed would come true. But when a cryptic letter from her former student arrives — the writer begs for help — Jane will risk everything to save the life of an innocent child.

A frantic trip to London is fraught with danger, as Jane is robbed at knife-point. But Jane Eyre is nothing if not courageous. She arrives at the pricy girls’ school in time to see a dead body removed from the premises. Now Jane must race against the clock to prevent another child from dying. When her identity is mistaken for that of an errant German teacher, Jane decides to go undercover in this house of horrors. Once inside the school, Jane’s worst suspicions are confirmed. A killer roams the halls and targets young girls. Each hour that passes puts another child’s life on the line and Jane can only keep her identity secret for a little longer…

Can Jane track down the killer and convince the local authorities to lock up this cunning murderer? Or will Jane forfeit her reputation, the family diamonds, her health, and maybe even her life on what might be a fool’s errand?

Death of a Schoolgirl is the critically acclaimed winner of the Daphne du Maurier Award for Literary Excellence. It is the first novel in the Jane Eyre Chronicles, a historical romantic mystery series. If you like classic stories, spunky heroines, thought-provoking social issues, little-known historical facts, and books that leave you feeling glad you read them, you’ll adore Joanna Campbell Slan’s captivating tale.

Buy Death of a Schoolgirl and get swept away today!

Death of a Dowager: Book #2 in the Jane Eyre Chronicles

The Second Book in the Critically Acclaimed Historical Mystery Series Featuring Jane Eyre as an Amateur Sleuth. When her husband’s damaged vision grows worse, Jane Eyre Rochester suggests a trip to an ocular specialist in London. But a night at the opera changes everything! And what seemed like a healing journey becomes a deadly puzzle that Jane must solve if she wants to protect those she loves.

London, early 1800s — With extensive repairs being made to Ferndean, the rural home of the Rochesters, Jane and her husband accept an invitation from a friend to stay with her in London. Jane is reluctant to abandon their peaceful home in the countryside, but her husband’s damaged vision has grown worse—and so have his feelings of depression. Jane hopes that time spent in the nation’s bustling capital will buoy his spirits and give him the chance to receive treatment from a specialist.

Once in London, the Rochesters accompany their friend to the Italian Opera House. However, is more drama in the audience than on the stage! Jane not only unexpectedly finds herself in the presence of the King, she also comes face-to-face with an old nemesis, a dowager who once hoped her daughter would marry the man who is now Jane’s husband. Not surprisingly, the aging dowager deals Jane a very public snub. Hoping to mitigate the damages, Jane makes a social visit to the dowager’s house, only to have the elderly woman drop dead while taking tea! It’s clear the dowager’s death was an unnatural one, and Jane must set her considerable intelligence to the problems of solving the crime…and then a summons from King George IV himself puts Jane squarely in the midst of a battle for the English throne—and the religious freedom of a nation!

Death of a Dowger is the critically acclaimed second novel in The Jane Eyre Chronicles. If you like intelligent female characters, a dash of interesting but little-known history, and intense emotions in a historical setting, you’ll fall in love with Joanna Campbell Slan’s captivating tale.

Buy Death of a Dowager today, and escape to another time and another place with characters you’ll cheer.