The fourth book in a new series featuring Sherlock Holmes and John Watson, written by a USA Today and Amazon Bestselling Author.

The world was not prepared for this story, a conspiracy hatched in the highest levels of the British government. A rogue Minister of Defense plans to turn soldiers into blood-thirsty animals—and Holmes and Watson may be among their first victims.

The adventure starts when Holmes is warned away from investigating Jack the Ripper’s heinous crimes. Despite Holmes’ well known skills, he is sidelined. He must content himself with a straightforward case, finding a bolting beau, the result of a simple lovers’ quarrel.

But that “romance gone wrong” is really the key to a nasty secret with tendrils reaching all the way to a Sumatran island. That’s where four castaways made a difficult decision. They turned their backs on a society that sent them packing and allowed themselves to be infected with a deadly virus. After all, they never expected to ever come home again… And they certainly never expected to be considered lethal weapons! Can Holmes and Watson stop them from being used for evil purposes?

This fast-paced adventure will take Holmes and Watson from the dregs of London to its noble heights. The two friends will travel from Bedlam, the hospital for the insane, to stately Windsor Park. Sherlock Holmes and the Giant Sumatran Rat is a fast-paced thrill ride that’s sure to keep readers on the edge of their seats. If you like historical thrillers with a hint of the supernatural, you’ll love this series. Each book stays true to Sherlock Holmes and his faithful friend, John Watson, whilst featuring a cast of real people and issues pertinent to the times.

This series is perfect for fans of Laurie R. King, Preston Child, and Joanna Penn.

First book in a New Series for those who love traditional mysteries!

FANS OF SHERLOCK HOLMES — AND ALL MYSTERY LOVERS — REJOICE

When his brother Mycroft disappears, Sherlock Holmes is drawn into the most thrilling case of his career, one that puts his powers to the test as he goes up against the Father of Lies, the Lord of Evil himself. The stakes couldn’t be higher as Holmes and Watson are sent by leaders all over the globe to battle for the very survival of mankind. An international chase will lead them from the serene rooms of London’s Diogenes Club to a scenic, frozen wasteland in upper New York. The two friends will battle their way through caves and underground tunnels and even confront the magnificent Niagara Falls. Readers will love this eerie journey into the lair of the most diabolical villain ever.
The immortal pair’s friendship — indeed, their very lives — will be threatened by the Father of Lies, a cunning creature who would drain every ounce of their willpower and courage. Along the way they — and readers — will meet memorable characters. Like Wiggins, former head of the Baker Street Irregulars, now all grown up! Everyone in this powerful narrative, heroes and villains and supernatural beings, will linger in readers’ memory.
Fans of Laurie R. King, Anthony Horowitz, Kareem Abdul-Jabbar and Anna Waterhouse, Sherry Thomas, William Ritter, and of course, Sir Arthur Conan Doyle will delight in these new adventures of the brilliant sleuth, his good friend, and his nemesis.

The third book in a new series featuring Sherlock Holmes and John Watson.

In this continuation of a new twist to the Sherlock Holmes’ canon, Holmes and Watson reluctantly search for a missing sailor…and stumble on a sinister plan to embarrass and de-throne Queen Victoria. The two friends must work together as never before, in an adventure that takes them under the seas on a wild and harrowing chase to unravel a deadly mystery.

It begins innocently enough when Holmes and Watson respond to a wife’s plea to find her missing husband. The woman evokes Watson’s sympathy, but Holmes sees discrepancies that suggest she’s lying.

Why lie? And why such an elaborate ruse?

She’s told them about ships gone missing, supposedly after meeting a sea monster. Could that be what happened to her beloved spouse? Whilst investigating, Holmes and Watson quickly realize there’s mischief afoot. The highest levels of British government are behind the deaths of entire crews of sailors. But to what end? And how has this been kept this a secret so long?

The Queen has been lost in grief after the death of her much loved friend, John Brown. Now she’s turned her attention to a new companion, her beloved Munshi, a simple man from India. There are those who would do anything to destroy this friendship and send that man away. But would they go so far as to murder innocent sailors whose only crime is serving the Crown? The answer is…maybe.

Holmes and Watson must rely on their wits, their bravery, and their friendship to accomplish their goal—saving the British fleet and preserving the reputation of Queen Victoria.

If you like historical thrillers with a hint of the supernatural, you’ll love this series. Each book stays true to Sherlock Holmes and his faithful friend, John Watson, whilst featuring a cast of real people and issues pertinent to the times.

This series is perfect for fans of Laurie R. King, Preston Child, and Joanna Penn. You’ll want to ORDER your copy today!

This series is perfect for fans of Laurie R. King, Preston Child, and Joanna Penn. 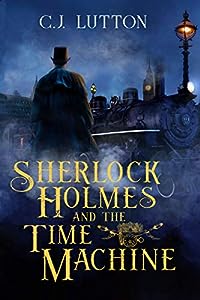 Sherlock Holmes and the Time Machine: Book #4 in the Confidential Files of Dr. John H. Watson

Once again, the Confidential Files of Dr. John Watson provide us with a thrilling Sherlock Holmes adventure! If you love Holmes, this book will be your cup of tea!

Sherlock Holmes and his friend, Dr. John Watson, are no strangers to danger—but a visitor’s claim that they are to be the targets of an assassin is unsettling. Moreover, the man says he has created a time machine that has whisked him away to the future. Astonishing! The idea is so outlandish that the great detective considers tossing the man out on the street. But there’s more. The assassin will also shoot Queen Victoria’s son, the crown prince, when he steps off a train to celebrate her Diamond Jubilee Celebration. Moreover, the stranger can prove his odd assertion. He returns with pictorial evidence, a “moving picture” (a pad of sequential photos) that shows the violent deaths of Holmes and Watson over and over again in grotesque detail. With these horrible images seared into their brains, the two sleuths must begin a deadly race against the clock. And if they lose, the price will be more than their lives. Their failure might actually cause the empire to fall. Clearly, it will take every iota of the famous inquiry agent’s prodigious mental powers to puzzle out an event that hasn’t happened. Holmes turns to his brother for help, only to learn that Mycroft Holmes might actually be behind this dastardly plot. Is it possible that Holmes’s own brother is a traitor to the realm?
Mycroft has all the resources of the British Empire at his disposal, while Holmes has only Watson and his merry band of Irregulars, street urchins he’s trained to work as spies. How can Holmes possibly hope to thwart his brother’s superior resources?
He can and he must.
Sherlock Holmes and Watson must pit themselves against a foe that all men fear…Father Time.