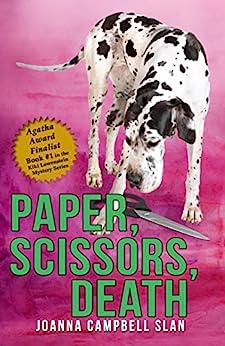 JUST BECAUSE HER HUSBAND’S NAKED, DEAD, AND IN A HOTEL BED…

…it might not be what it seems. But there’s that scarf in his mouth. Of course it is.

Given the situation, Kiki Lowenstein can’t help remembering that George got her pregnant while cheating on his girlfriend.
True, he did the right thing at the time, and their much-loved daughter Anya is now eleven years old. But suddenly he’s embarrassingly dead, and Kiki’s financially embarrassed– the schmuck disinherited his own family!
Time for the tough to get going. Passive Kiki transforms swiftly into a fighter, walking right out of her luxurious lifeand into a scrapbooking store, where she deftly turns a hobby into a moneymaker. Her new gig goes slightly awry when George’s not-so-ex-girlfriend insults her in public, but that’s just the beginning. The hurt keeps piling up.
Her husband’s secret life expands before her eyes, and she discovers Anya has a shocking secret of her own. Then the cops come for her. And Family Services comes for Anya. Good thing this scrapbooker has turned into a scrapper– not to mention a budding detective.
An Agatha Award finalist, Joanna Campbell Slan’s first Kiki Lowenstein scrapbooking mystery showcases the author’s delightful gift for turning life’s most dismal moments into humor, yet making us feel there’s hope for us all, even at the darkest of times.
Hope arrives for Kiki in the twin forms of a hot, homicide detective and her own newfound ability to cope.
Hobbyists will love the way author Slan weaves the art of scrapbooking into the solution, and everyone will love Kiki herself.
Paper, Scissors, Death is the kind of mystery that keeps you turning the pages just to spend time with the characters, who somehow make you feel this could be you if your life turned upside down– and make you hope you’d turn it around as gracefully.
In case that’s not enough of a stress-reliever, Slan also provides the ultimate warm-and-fuzzy: a wonderful floppy-eared dog. Fans of feel-good cozy mysteries, especially funny ones with animals or hobbies, should run, don’t walk, and pick up the pace if they love authors like Alexander McCall Smith, Hope Callaghan, Amy Vansant, and Carolyn Hart.

SWEET MEMORIES MADE OF MURDER–
PASTRY, PIZZA, AND A POISONOUS PILL…

St. Louis, Missouri — Recovering from financial ruin and the murder of her husband—
she’s not saying which was worse — Kiki Lowenstein’s getting her life back on track as a professional scrapbooker, in charge of a huge event at the Missouri Botanical Garden. But during the scrapbooking soiree, somebody has an allergic reaction, and not to the plants.

As luck would have it, it just happens to be someone Kiki’s allergic to—scrapbooking rival, Yvonne Grayson, whose epi pen is mysteriously empty. As planned—by someone—the victim goes into anaphylactic shock and dies, right in front of half the hobbyists in the state of Missouri.

Bad press for Kiki’s scrapbooking cred! Fortunately, Detective Chad Detweiler’s on the case—Kiki’s crush from the late spousal unpleasantness. He’s been bringing her pizza, hold the romance, and now it’s pizza, hold the intel—Kiki’s about to gain weight without even getting kissed—or solving the case herself.

But he might have let slip just enough to go on…Yvonne was allergic to aspirin and it was found in her favorite pastry. A sweet and healing tidbit?

The fun of this one, of course, is in the scrapbooking lore and fiery rivalry between Kiki and her scrapbooking frenemies. You’ll find yourself rooting for the sweet and resilient Widow Lowenstein, who’s determined as ever to protect her complicated but wholesome suburban life. Author Slan weaves pro scrapbook sleuthing tips effortlessly into the plot, making the reader feel like they’re getting a crash course in cropping and hunting down a depraved murderer. It’s a double how-to for the price of one!

CUT, CROP, & DIE examines professional jealousy in an unusual arena (crafting), while exploring the complexities of women’s friendships. In the end, it’s Kiki’s ability to make friends that saves the day.

The phrase “hostess with the mostest” takes on a whole new meaning when crafty amateur sleuth Kiki Lowenstein finds herself stuck in the middle of a hoarder’s crime scene in the third installment of the Joanna Slan’s cozy mystery series. But proceed with caution: this one’s as littered with surprises as it is clutter.

Scrapbook maven Kiki happens to be a card-carrying Episcopalian—but she respects the power of intuition. So when she has a “bad feeling” en route to Marla Lever’s house for a scrapbooking crop, she heeds her instincts. Something is definitely very wrong. Marla’s nowhere to be seen, although her car’s in the garage—buried under a heap of garbage and lawn furniture. Tip of the iceberg, sadly. Because the potential horror of scrapbooking in a hoarder’s paradise pales in comparison to the body the cops find in Marla’s freezer.

Marla’s nearly dead herself—passed out from heat stroke, no thanks to the suffocating aroma of her 101 feline friends. Or so it seems… But the hoarding and the human popsicle aside, something about her circumstances just doesn’t seem right to Kiki—whose insatiable curiosity and endearing persistence make her an ace amateur sleuth. For one, why would Marla turn off her A/C in the thick of a heat wave when she’s expecting company?

Alongside her coworkers at Time in a Bottle scrapbooking store (some more delightful than others), and with a helping hand from her longtime crush Detective Chad Detweiler, Kiki digs deep into a treasure trove of clues—from Marla’s semi-estranged children to her barely-touched inheritance—meticulously gluing the pieces together as only a scrapbooker could. But it’s only a matter of time until curiosity kills the cat—or until Kiki’s spidey sense winds her down a path even more treacherous than one of Marla’s hallways.

To say that “Ink, Red, Dead” is a page-turner is an understatement. Readers will tear through these pages like a fashion addict at a sample sale. And we dare you not to fall in love with Kiki–whose fearlessness would make her intimidating, were she not so adorable. Plus, her delectable romance with Detective Chad would provide a delightful relief—if it weren’t so steamy. The duo’s tension heats up in this outing ever-so subtly, one longing glance and another brush of the hand at a time–sure to make the toes curl! A sure thing for craft cozy fans of Brianna Bates, Laura Childs, Lois Winston, and Mollie Cox Bryan.